Are you trying to count values in your worksheet and don’t understand why the result is too high? Or are you looking for a method that excludes blank cells? Maybe you want to count only values which are greater than 1,000.
Excel gives you the power to count only the values that meet your criteria with five different count functions. So when do you use each one?

The COUNT function is the most basic of the five, and it’s the one you’ll call on most often. Use it to count the numeric values in a range. COUNT ignores blank cells, cells containing text, and cells containing errors. 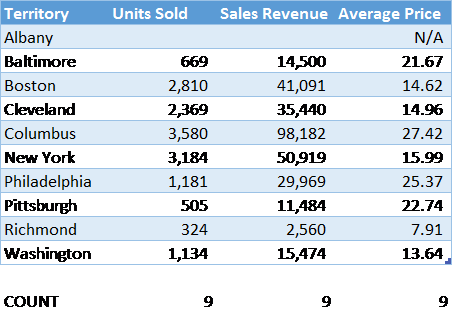 The COUNTA function is nearly identical to COUNT, but it picks up all values, including cells that contain text or error messages. Like COUNT, COUNTA ignores blank cells. 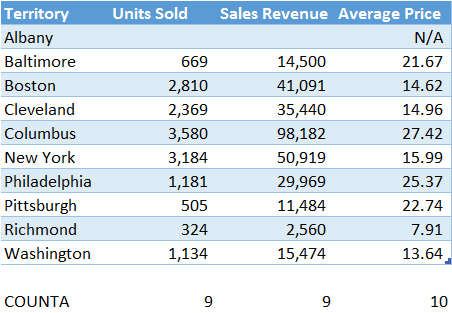 Like COUNT, COUNTA returns 9 for Units Sold and Sales Revenue because it ignores the blank cells for Albany. However, Albany’s Average Price is not blank, so COUNTA includes the text value “N/A” in its result. Note that a single space (“ ”) or an empty text string (“”) are not blank, so COUNTA will include them.

The complement of COUNTA, COUNTBLANK returns the number of cells which contain nothing at all—no numbers, no text, and no error messages. 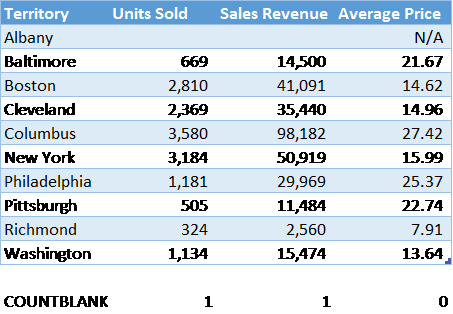 In this example, the only two cells empty of data are Albany’s Units Sold and Sales Revenue. The COUNTBLANK finds both. On the other hand, every cell has an entry for Average Price, so COUNTBLANK returns 0.

COUNTBLANK is especially useful to test a dataset which should contain values in every cell, a dataset in which a blank cell might indicate an error. If COUNTBLANK returns any value greater than 0, this would be a signal to double-check the data for accuracy.

Excel Formula – COUNTIF
More complex than other variations of COUNT, COUNTIF returns the number of cells that meet a certain condition. The function takes two parameters:
1. The range to count; and
2. The condition which each value must meet if it is to be counted. 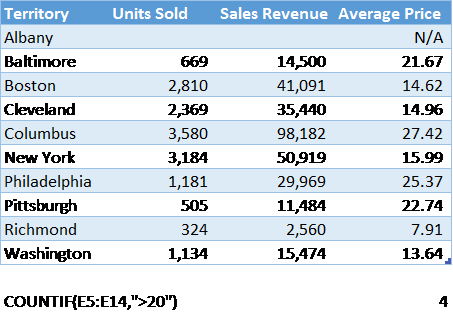 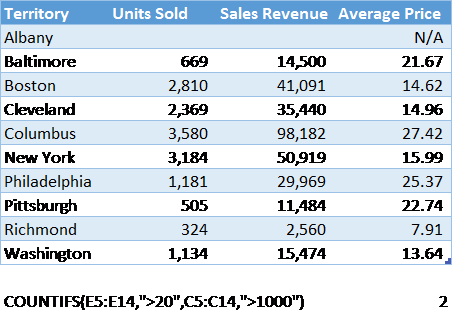 This function is especially useful to find averages or other ratios that exceed a certain threshold, excluding those with only a few values to avoid skewing the ratios with statistically insignificant data.

Additional Options
Do you need even more powerful count functions? Try combining these functions SUMIF, AVERAGEIF, or any of the additional formulas that Excel provides.