Once a formula is entered, only the result of the formula’s calculation appears. Clicking on the cell reveals the formula behind the cell’s value in the formula bar.

Let’s begin with the Excel Sum Formula. The SUM function adds any specified arguments and values together. Arguments can include cell references, ranges, arrays, formulas, constants, or even results from other calculations and formulas you have set up.
Here is the syntax: SUM(number1,[number2],…])

“SUM” is the name of the function while “number1” and “number2” here are the variables. 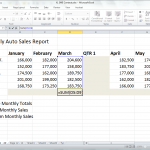 Excel SUM Formula
1. Select the cell where you want the calculated total to appear.
2. Click the Formula Bar to place your cursor there.
3. Begin to type “Sum” into the Formula Bar:
a. An “=” must begin the formula
b. Type the first value in your formula, whether that is a cell coordinate, a range, or a number.
c. Type a comma to separate values.
d. Type the second value in the formula.

In this example, the formula adds the number in the cell reference A4, the range of numbers between A7 and A10, then adds the constant 15.

4. Press the ENTER key on your keyboard to see the result.

Have a simple series of values to add and want to skip a few steps? Place your cursor in the cell you wish for the calculation to be displayed, then select the AutoSum button. The action selects the range of cells that Excel thinks you want to add. Hit enter if Excel guessed right.
You can find AutoSum easily in two places.
1. On the Home tab in the Editing group.
2. On the Formulas tab, in the Function Library group.
Excel SUM Formula Shortcut!
Forget locating the AutoSum button or typing in the formula bar. Instead press and hold the Alt key on your keyboard and the plus (+) sign.

Use an Excel Formula to Convert Text to Numbers

Ease the Pain of Data Entry with an Excel Forms Template

How to Create a Report in Excel: The PivotTable