What does professionalism look like? Do you “know it when you see it”? Take a look at the images below and sort them into two groups: More Professional and Less Professional. 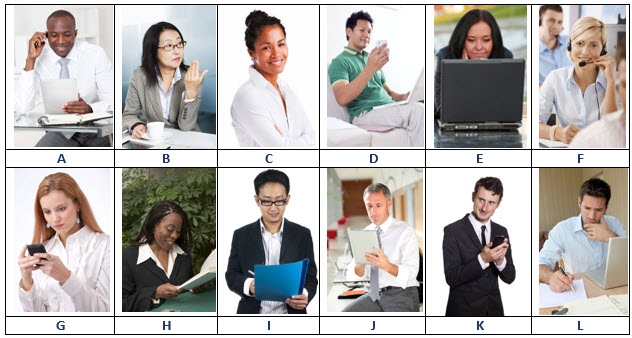 Did you sort all of the people with digital devices into one group or the other? If not – congratulations! You’re not device-biased. If you did, you’re not alone – but were you being accurate?  Or fair?

More than a third of the respondents to a recent workplace study1 felt that there had been an overall decrease in the level of professionalism among new employees at their organizations. About half, listed technology abuses as one type of unprofessional conduct they felt has been on the rise.

If you’re thinking this is a “young person problem,” think again. It turns out all age groups are equally guilty of technology abuses, as perceived by the surveyed employers: 49.4% percent of those under 35, 50.8% of those 35-55, and 45.9% of those over 55 were all viewed as being digitally distracted.

Clearly there is a perception that electronic devices are disruptive to the workplace, and this is the 64GB question, are they really?

Companies are at best conflicted with respect to their attitudes about the employees’ relationships with and dependencies on technology. They want to have their digital dessert and to eat it, too.

So how do you resolve that conflict? How do you promote a professional use of technology at work that also embraces the changing technological landscape and evolving attitudes toward connectedness? Here are a few suggestions:

So back to the original question: What does professionalism look like?  It looks well-informed, prepared and even-handed. It may or may not have a smartphone, but it certainly knows and understands the rules of how and when to use one at work.

Three Steps to a New Assertive You